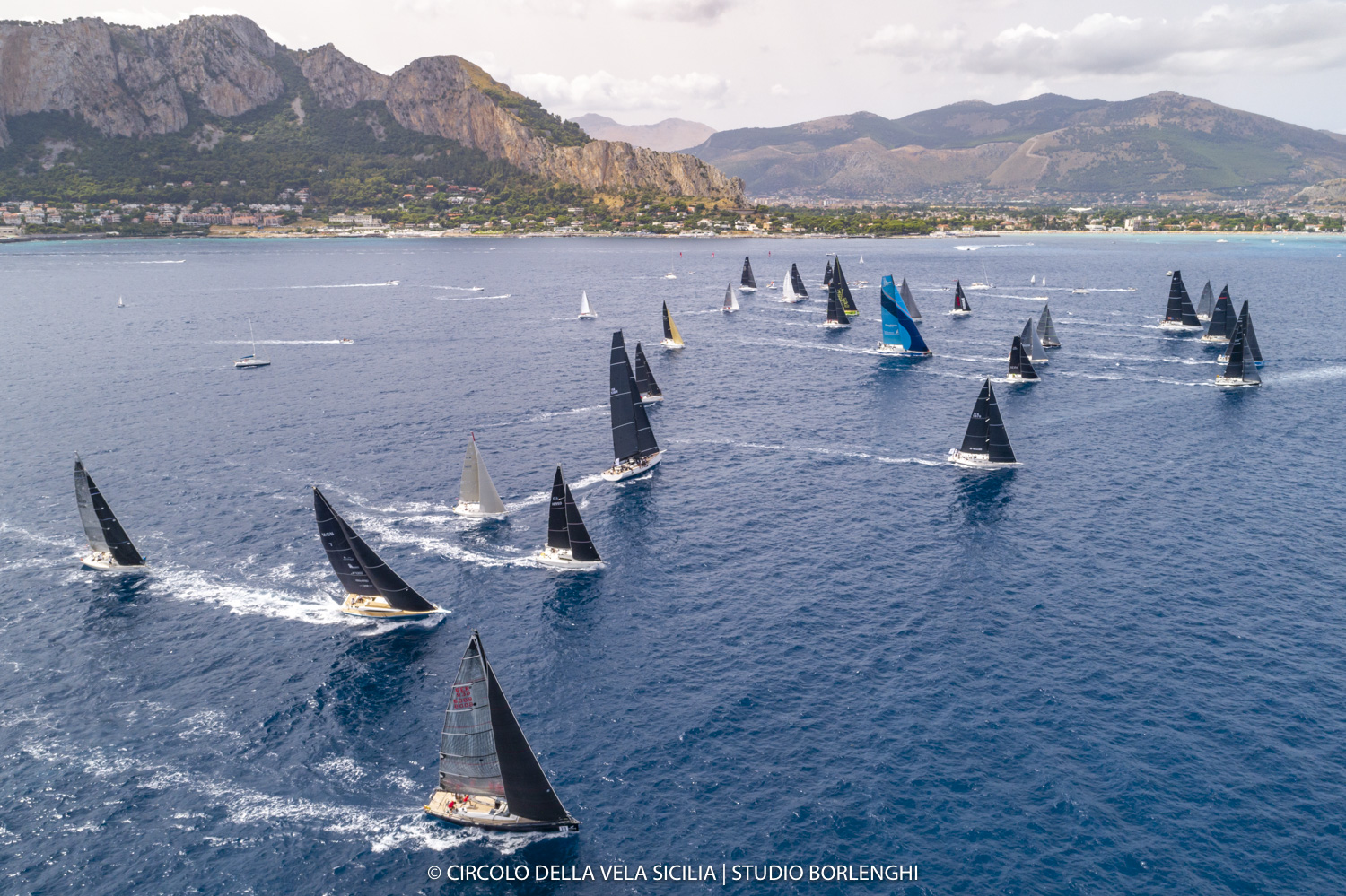 There were exceptional conditions today in the Gulf of Mondello for the start of the Palermo-Montecarlo 2022, the offshore regatta organized by the Circolo della Vela Sicilia, the Club from Palermo that was alongside the Team Luna Rossa Prada Pirelli in the victory of the 2021 edition of the Prada Cup and currently involved in next Challenge of the America’s Cup, and in collaboration with the Yacht Club de Monaco and the Yacht Club Costa Smeralda.
At 12PM on the dot, pushed by a favorable wind between 10 and 12 knots of intensity (in the direction of 320°) and which soon after strengthened to 16 knots, the 37 boats of the fleet crossed the starting line positioned by the Race Committee overseen by Race Director Alfredo Ricci, ready to sail along the nearly 500-mile route that separates Palermo from Montecarlo, where halfway through the race there will be a gate to cross, positioned at the Straits of Bonifacio.
A start as suggestive and it was beautiful, one of pure emotion both for the participants and for the numerous spectators who watched from land or sea this majestic show that is the trademark of the Palermo-Montecarlo.
A show that was made more compelling right from the start by the battle of the boats aspiring to win the Giuseppe Tasca d’Almerita Trophy, awarded to the first boat on the finish line in real time, especially between the Neo 570 Carbonita skippered by Edoardo Bonanno and Paolo Semeraro, the boat sailing for the Circolo della Vela Sicilia and the Austrian Farr 65 Sisi, which were respectively first and second at the buoy of disengagement, followed by the French boat Solano skippered by Pascal Feryn.
With regards to Carbonita, a touching tribute was made by the crew of the boat sailing for the Circolo della Vela Sicilia to the memory of Mainaldo Maneschi, a member of the Club presided by Agostino Randazzo who passed away tragically young last July: a banner bearing a beautiful image of Mainaldo was unfurled on one side of the boat before the start of the race, conjuring for everyone watching a stir of emotions and unforgettable memories.
Besides the Tasca d’Almerita Trophy, the awards up for grabs in this edition of the Palermo-Montecarlo are the Angelo Randazzo Perpetual Challenge Trophy for the overall winner in the IRC group; the Circolo della Vela Sicilia Trophy, for the overall winner in the ORC group; the Emanuele Bruno Trophy, awarded to the best Sicilian crew; and the classic trophies according to the classes.
At the moment of writing the fleet - which can be tracked live on the satellite system YB Tracking from the regatta homepage www.palermo-montecarlo.it - has already travelled 25 miles, aided by a nice mistral wind that should become stronger as the day goes by: leading the race is Sisi, followed by Carbonita, Tonnerre de Glen, Lady First 3 , and Solano. In 7th place the Swan 42 Spirit of Nerina Lauria, the boat sailing for the Circolo Canottieri Roggero di Lauria (skippered by Gabriele Bruni).
A leg of the Italian Offshore Championship of the Italian Sailing Federation, of the Mediterranean Maxi Offshore Challenge of the International Maxi Association, and of the Mediterranean Class40 Trophy, the Palermo-Montecarlo is organized by the Circolo della Vela Sicilia in collaboration with the Yacht Club de Monaco e the Yacht Club Costa Smeralda, supported by the Department of Sport, Tourism, and Entertainment of the Regione Siciliana and with the promotional activity of SEESICILY; the co-participation of the Metropolitan City of Palermo; the support of the Sicilian Regional Assembly (ARS) and the partners Fondazione Sicilia, Porsche-Centro Assistenza Porsche Palermo, and Tasca d’Almerita.