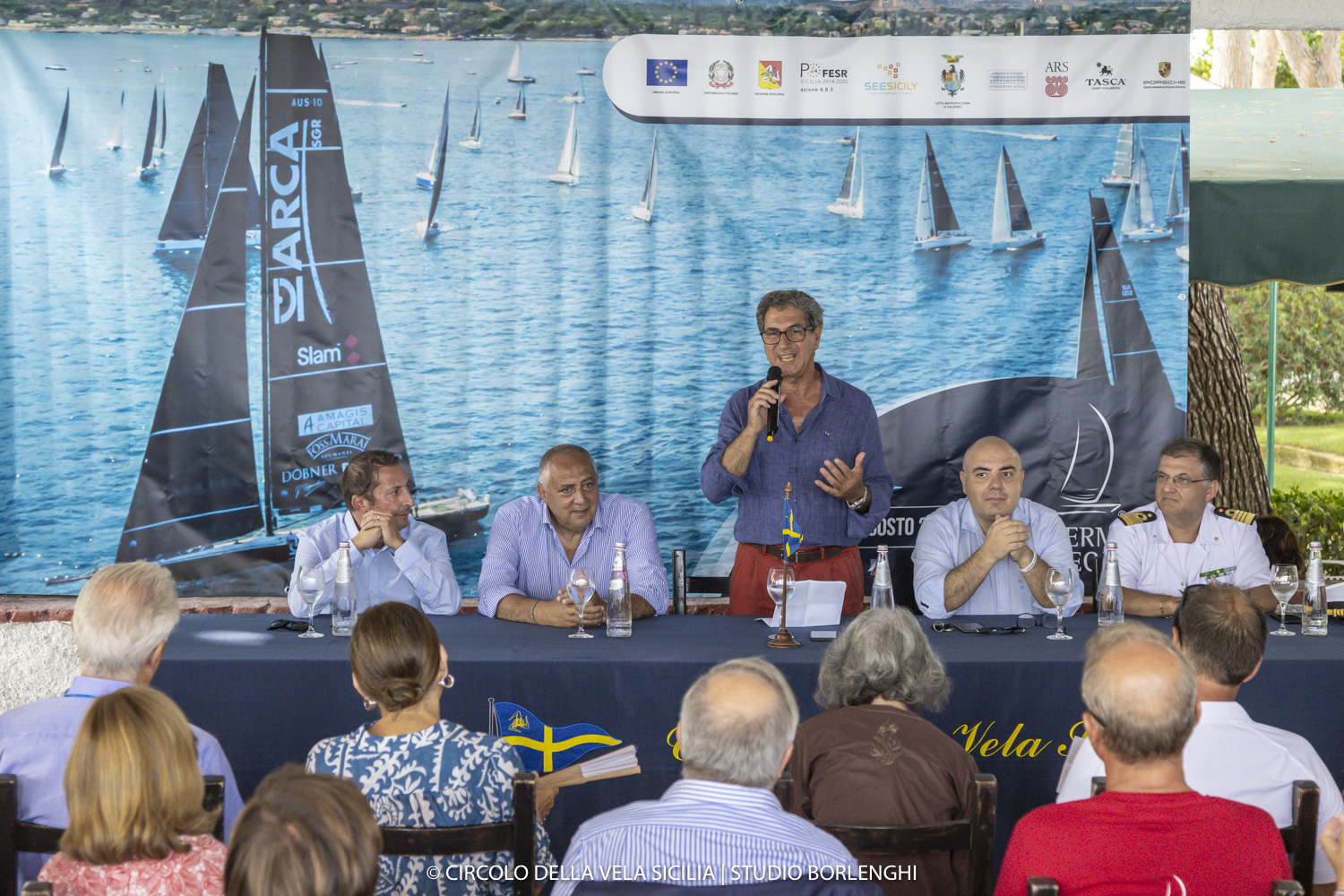 It’s great anticipation today in Palermo where the 2022 edition of the offshore regatta Palermo-Montecarlo that will set sail tomorrow at noon from the Gulf of Mondello was presented the during the course of a press conference at the Circolo della Vela Sicilia.

Present at the press conference besides the President of the Circolo Agostino Randazzo were the mayor of Palermo Roberto Lagalla; Raul Russo, representing the head of the Department of Tourism, Sports, and Entertainment of the Regione Sicilia Manlio Messina; Capitan Raffaele Macauda, Maritime Director of Western Sicily; and Francesco Ettorre, President of the Italian Sailing Federation.

“The enthusiasm that the Palermo-Montecarlo is stirring up is explosive and a great satisfaction for our Club as well as for our partners and the other Clubs that have been involved in the organization of the Regatta since 2005”, said Randazzo, president of the Club from Palermo that was alongside the Team Luna Rossa Prada Pirelli in the victory of the 2021 edition of the Prada Cup and currently involved in next Challenge of the America’s Cup. “It is a source of pride for us and the whole of Sicily that is currently at the center of international sailing, where boats as beautiful as they are fast as well as many famous sailing champions will be taking part. For this reason I’m inviting everyone tomorrow at noon to enjoy this show of sails that will make our Gulf of Mondello even more beautiful and suggestive”.

A number of 37 boats, from 9 Countries, are currently moored at the Marina di Villa Igea and which tomorrow will be sailing the almost 500 miles that separate Palermo from Montecarlo, where halfway through the course they will pass a gate at the Straits of Bonifacio. The spotlights will be on the Neo 570 Carbonita owned by Manolis Kondilis, the home team boat of the Circolo della Vela Sicilia which have on board a super crew that will notably include the co-skippers Edoardo Bonanno and Paolo Semeraro alongside Tommaso Chieffi, Alberto Bolzan and Gaetano Figlia di Granara; on the Swan 42 Spirit of Nerina Lauria skippered by Gabriele Bruni and sailing for the Circolo Canottieri Roggero di Lauria; on the ICE 60 Before the Storm belonging to Massimo Lentsch of the Circolo Velico Sferracavallo; on the Elo II, the boat sailing for the Yacht Club Italiano di Genova, with on board a crew young people from the Club led by the former skipper of Azzurra Mauro Pelaschier; on the Austrian Sisi skippered by Gerwin Jansen; on the French team Solano owned by Pascal Feryn with Andrea Caracci on board; the Lady First 3 owned by Jean-Pierre Dreau; and on Dominique Tian’s Tonnerre de Glen.

A fleet rich with renowned names to be followed mile after mile via web though the YB satellite tracking system (access from the regatta website www.palermo-montecarlo.it), which will be competing for the Giuseppe Tasca d’Almerita Trophy, awarded to the first boat on the finish line in real time; the Angelo Randazzo Perpetual Challenge Trophy for the winner on corrected time in the most numerous group between ORC and IRC; the Circolo della Vela Sicilia Trophy, for the overall winner in the least-numerous group between IRC and ORC; the Emanuele Bruno Trophy, awarded to the best Sicilian crew; and the classic trophies according to the classes.

“The number of crews and well-known names of yachtsmen participating who will be amongst this year’s protagonists prove that the Palermo-Montecarlo has become a regatta that has a strong international appeal. A competition which for Palermo represents an important showcase not only in the eyes of those who come here to compete but for the foreign public in general. It’s a great continuing tradition even for our city which, above all, restarts at full speed ahead after two years of pandemic”, said the mayor of Palermo Roberto Lagalla during the press conference.

“There is always great anticipation around the Palermo-Montecarlo, which has become a not-to-be-missed event. At the Department of Sport we side with the Sicilian crews but naturally being good sportsmen we support a fair and high-quality competition made up of professionals and established champions. Furthermore, the Palermo-Montecarlo has been able to attract not only yachtsmen but also tourists and enthusiasts alike, which enhances the offer and attractiveness of the Sicilian coastlines, and in particular the Gulf of Mondello. Therefore, I wish everyone fair winds and may the best boat win” were the words that the head of the Tourism, Sport, and Entertainment Department of the Regione Sicilia Manlio Messina dedicated to the regatta.

A leg of the Italian Offshore Championship of the Italian Sailing Federation, of the Mediterranean Maxi Offshore Challenge of the International Maxi Association, and of the Mediterranean Class40 Trophy, the Palermo-Montecarlo is organized by the Circolo della Vela Sicilia in collaboration with the Yacht Club de Monaco e the Yacht Club Costa Smeralda, supported by the Department of Sport, Tourism, and Entertainment of the Regione Siciliana and with the promotional activity of SEESICILY; the co-participation of the Metropolitan City of Palermo; the support of the Sicilian Regional Assembly (ARS) and the partners Fondazione Sicilia, Porsche-Centro Assistenza Porsche Palermo, and Tasca d’Almerita.