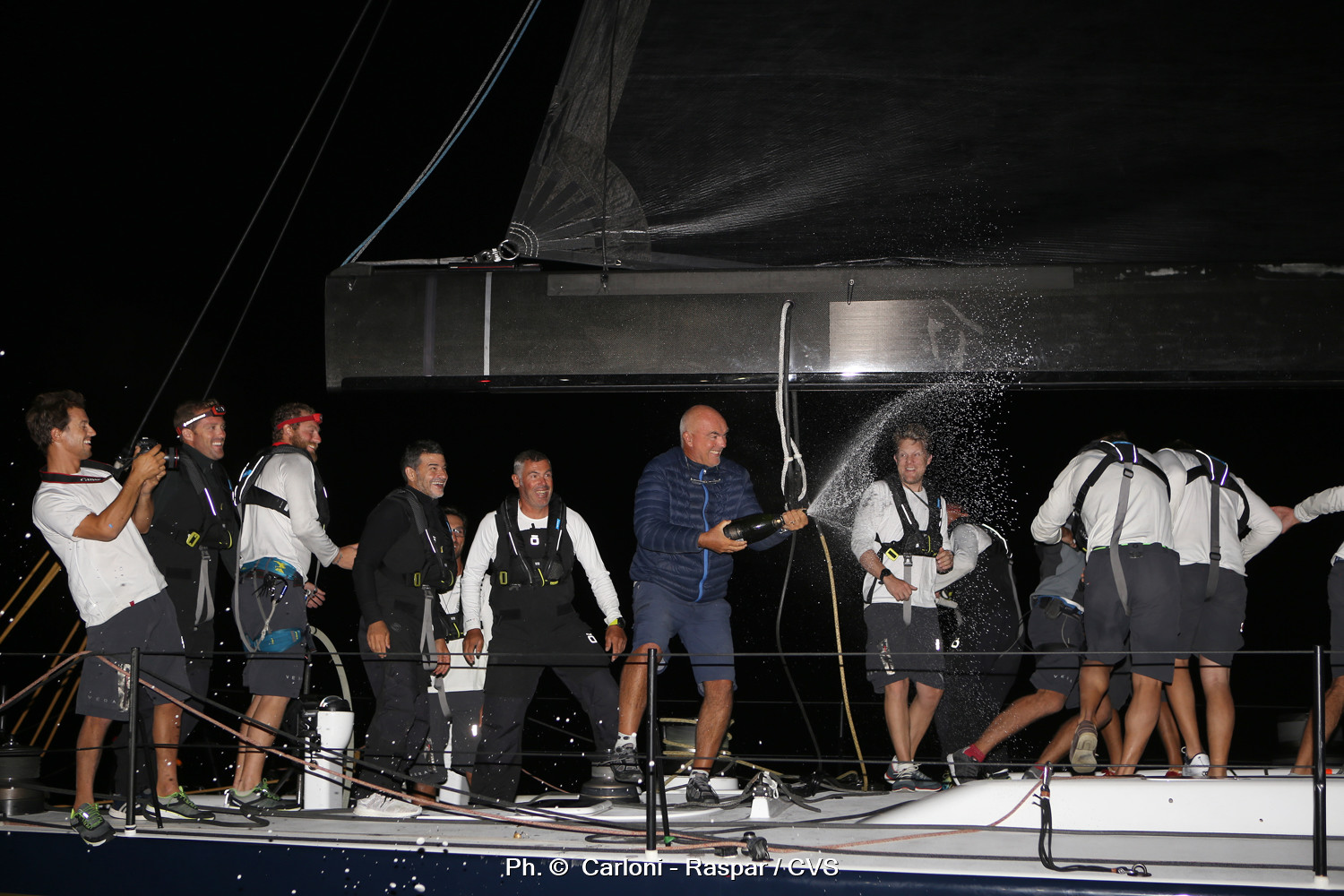 The Maxi Vera owned by the Argentinian Miguel Galuccio's is the first yacht to cross the finish line of the XV Palermo-Montecarlo: the 82' long hull with, among others, the Dutch legend of the Volvo Ocean Race Bouwe Bekking and the Olympic champion Michele Regolo, cut the finish line positioned off Montecarlo this morning at 5:13, closing the almost 500 miles of the racecourse (on the direct route) in two days, 17 hours and 13 minutes, far above the record established by Esimit Europa 2 in 2015.
With the conquest of the line honors of the regatta organized by the Circolo della Vela Sicilia, in collaboration with the Yacht Club de Monaco and the Yacht Club Costa Smeralda, Vera won one of the two challenge trophies up for grabs, the Giuseppe Tasca d'Almerita Trophy, and conquering it represents a huge satisfaction for the entire crew - mostly Italian - protagonist of a near to perfect race characterized by well-chosen tactical decisions.
"Yes, we did well because at the start of the race we opted for a different strategic choice than the others and in those situations you never know if you made the right choice or not" says Bouwe Bekking, the sea's champion who won 8 stages of the full crewed round the world race. "We have traveled more miles, but the option has paid off at the end, the crew did a great work and we are really stoked with the result that allowed us to cross the finish line in first place. Palermo-Montecarlo is an excellent and perfectly organized race with a spectacular and challenging racecourse: it was the first time for me and I'm really happy to be there".
"It was the first time for me too and I must say that the Palermo-Montecarlo is a splendid regatta, which takes place in an incredible scenario, very difficult because it presents many options in terms of tactics", saild Michele Regolo, member of the Italian Sailing Team at the London 2012 Games in the single Laser. "We started well, then our navigator Aksel Maghdal made a very good move setting the regatta on a different strategy than all the others competitors, that choice has finally paid. At 30 miles from the finish line, the wind totally died and we have feared for a recovery of our followers, but then we found some breeze which fortunately held up to the finish line in Montecarlo: we are really very satisfied with this result ".

After Vera, the second yacht on the finish line in Montecarlo was the 72' Aragon owned by Arco Van Nieuwland and Andries Verder, they cut the line at 14.00 and were followed three minutes later by the 70' Maxi Adelasia di Torres owned by Renato Azara (with onboard Lorenzo Bodini). At 14:05 the French IRC 52 Arobas owned by Gérard Logel (on board the famous French navigator Eric Drouglazet finished the race and at 14:34 was the turn of the Estonian Volvo 65 Ambersail2 owned by Linas Ivanauskas.
Under the careful supervision of the Race Director Alfredo Ricci, the arrivals will go on all night long and up to tomorrow (the time limit to cross the finish line is monday at 12.00), but already in the next few hours it will be possible to draw up the temporary rankings valid for the awarding of the second challenge trophy, the Angelo Randazzo Trophy that will go to the overall winner of the ORCi group, and the other prizes to be won. To follow the live race on the web, through the satellite tracking system, you can download the YB Tracking APP or click directly on this link: yb.tl/pm2019
Stage of the Italian Offshore Championship organized by the Italian Sailing Federation and stage of the of the IMA's Mediterranean Maxi Offshore Challenge, the Palermo-Montecarlo is organized by the Circolo della Vela Sicilia in collaboration with the Yacht Club de Monaco and the Yacht Club Costa Smeralda, and with the support of the Municipality of Palermo, of the Sicilian Regional Assembly, of the Fondazione Sicilia Foundation, of the partners Conti Tasca d'Almerita and Premiati Oleifici Barbera, and of the technical sponsors Gesap and R. Motor Toyota and Visiva.
with us for the race