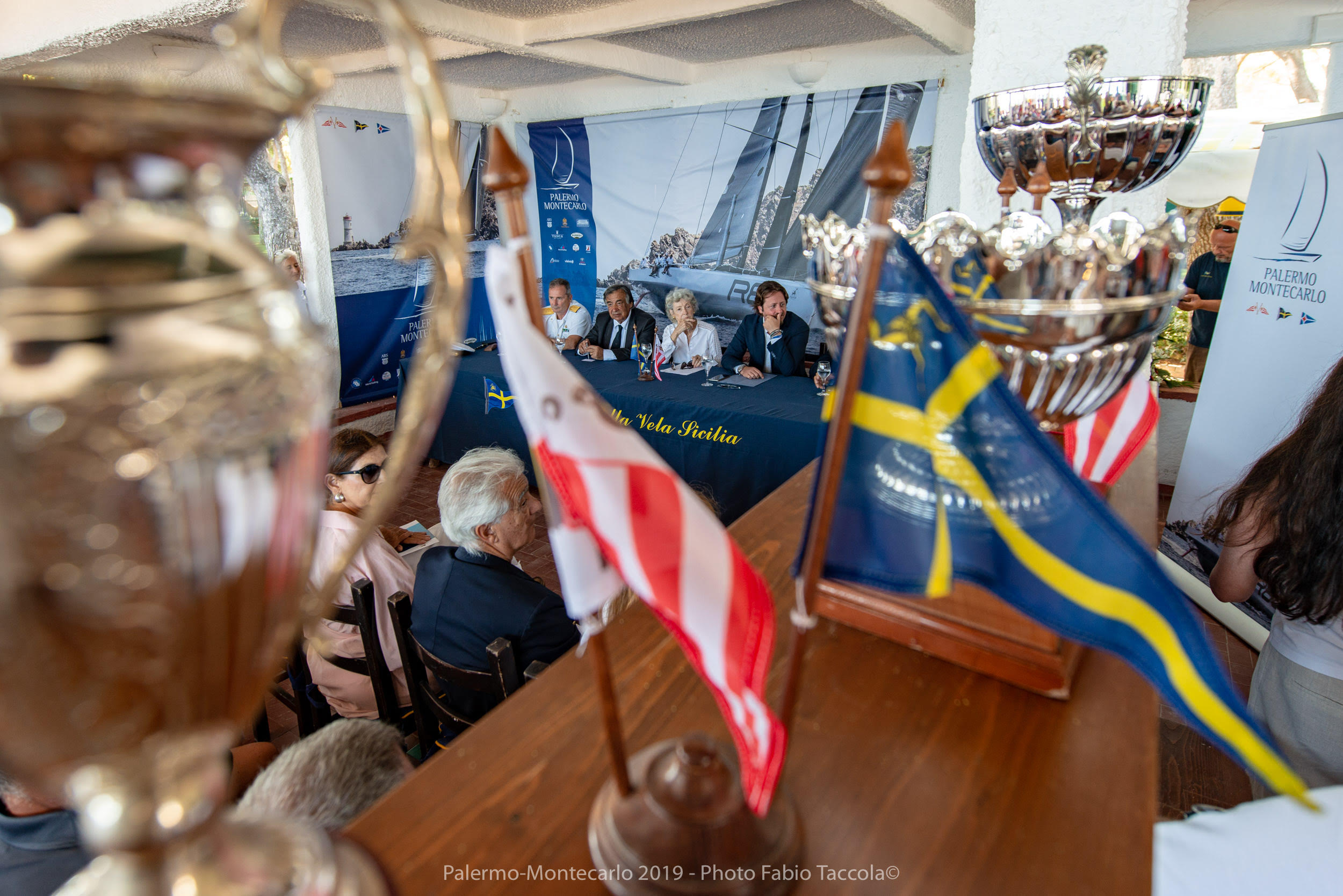 The great international sailing is back in Sicily with the XV edition of the Palermo-Montecarlo, the offshore regatta organized by the Circolo della Vela Sicilia, in collaboration with the Yacht Club de Monaco and the Yacht Club Costa Smeralda which was presented today in Mondello at the headquarters of the club chaired by Agostino Randazzo, during a press conference in presence, among others, the Mayor of Palermo Leoluca Orlando, the Regional Councilor for Tourism, Sport and Entertainment of the Sicily Region Manlio Messina, the Admiral Roberto Isidori, Harbor Office of Palermo Chief, and the Federal Councilor responsible for offshore sailing, Donatello Mellina.
Not less than 57 boats coming from 10 nations, including monohulls and multihulls - a record in the history of this regatta - are currently moored at the Marina of Villa Igiea. Tomorrow at noon, under the direction of Alfredo Ricci, President of the Race Committee, the fleet will leave the gulf of Mondello to tackle the approximately 500 nautical miles of the racecourse that separate Palermo from Montecarlo, with the obligatory passage of a gate placed off Porto Cervo and with the free option to choose whether to leave Corsica to the right or to the left.
In its history that racecourse has attracted many champions of the sea and also this year - indeed, specially this year – it will be the theatre of a very high profile challenge between boats and world-class crews. In regatta, among many others, former Italian Olympians such as Matteo Ivaldi (Primavista Lauria), Michele Regolo (Vera), Paolo Semeraro (Alemaro) and the current federal coach for the catamaran Nacra 17 Gabriele Bruni (Primavista Lauria), legends of world-wide ocean sailing such as the Dutch Bouwe Bekking (Vera) and the French Eric Drouglazet (Arobas), Kito de Pavant (Made in Midi) and Olivier Douillard (Aragon), and veterans of Italian offshore sailing such as Paolo Bottari (Vera) and Roberto Ferrarese (Anouk). There will also be the French sailor Morgane Ursault-Poupon, daughter of the legendary Philippe Poupon, on the 60' trimaran Ad Maiora skippered by Bruno Cardile (onboard there will be also Andrea Pendibene) and the former Croatian skier Ivica Kostelic - four Olympic silver and five World Cups won in career - skipper of Spirit of Croatia.
In addition to the single class prizes, two other trophies are up for grabs: the Angelo Randazzo Perpetual Challenge Trophy, for the winner in compensated time of the largest group of the two classes, this trophy has been won last year by the French crew of Tonnerre de Glen, and the Giuseppe Tasca d'Almerita Trophy, for the first hull to cross the finish line in Montecarlo in real time, a challenge that this year will see protagonists the Maxi Vera owned by Miguel Galluccio, Adelasia by Torres owned by Renato Azara, Ambersail 2 owned by Linas Ivanauskas and Aragon owned by Nicolas Le Carpentier.
There is great anticipation also for the regatta of the Mylius 14E55 Zenhea Takesha owned by Natale Lia, this boat will have on board five young sailors from the racing team of the Circolo della Vela Sicilia, the ICE 52 Primavista Lauria from Palermo and the Class 40 Crossing Routes Vaquita skippered by Alessio Bernabò, with a special crew composed also of disabled sailors.
"Never like this year the international connotation of the Palermo-Montecarlo has been so strong, both for the number of nations represented, there are ten, and for the quality of the boats and crews present, which include real legends of world sailing", declared the President of the Circolo della Vela Sicilia, Agostino Randazzo. "It is the confirmation of the interest that our regatta receives outside of the Italian borders, a constantly growing appeal that represents one of the greatest satisfactions for our clubs and for all the people involved in the organization''. Randazzo concludes: "I'm sure that it will be a really exciting edition of the Palermo-Montecarlo, as always full of twists and turns, with many boats able to win in compensated times.''
Also this year, in the wake of a consolidated practice, the Circolo della Vela Sicilia will make available to participants a series of containers, which once loaded will be shipped by the organization directly to Montecarlo by land. A valuable service that will allow the crews to return to their port of departure without having to go back to Sicily to retrieve the material that wasn't on board.
Fundamental stage of the Italian Offshore Championship organized by the Italian Sailing Federation and of the Mediterranean Maxi Offshore Challenge organized by the IMA, the Palermo-Montecarlo, which, as already anticipated, will begin at 12 with the starting line in the Gulf of Mondello. The race will be followed online through the system YB Tracking satellite tracking (here is the link: yb.tl/pm2019). The regatta is organized by the Circolo della Vela Sicilia with the support of the Municipality of Palermo, the Sicilian Regional Assembly and the Fondazione Sicilia, of the partners Conti Tasca d'Almerita and Premiati Oleifici Barbera, and of the technical sponsors Gesap, R. Motors Toyota and Visiva.
with us for the race